“What really matters is that you do what lights you up, brings you joy, and that you are passionate about.” ~ Marilyn Lamoreaux

A few months ago, I wrote a blog that I titled, “Why Motivate When You Can Inspire?.” I’ve been thinking about it a lot since then and want to expand on the concept of becoming more inspirational. This is going to be the first of three parts on creating a more inspiring life.

I believe it is human nature to want to have an impact on the world we live in. I also believe most people live their entire lives never really knowing how to impact the world and certainly never really reaching their full potential. As we go through life, there are rare occasions when we discover something that significantly changes our lives. It is unfortunate that these discoveries sometimes go unnoticed or unrealized.

If you think about all of the momentous changes throughout history, you find they all occurred because someone had a deep inner inspiration. For example, Henry Ford had an inspiration to find an affordable way to manufacture automobiles and his inspiration lead to the creation of the modern assembly line. The Wright brothers were inspired to provide a way for air travel and through that inspiration created the first workable airplane. Martin Luther King was inspired by the thought where his children would be judged by the content of their character and not by the color of their skin and used that inspiration to inspire an entire movement to would transcend world borders. Every great movement, every great discovery, every powerful success story begins with inspiration.

For as long as man has existed, he has been guided by the North Star. It is the only star in 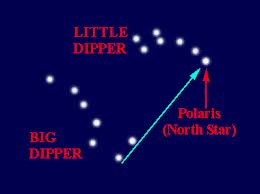 Many years ago, I experienced one of life’s discoveries when I learned of the power of having a guiding statement for my daily inspiration – a statement that would be the foundation of what I wanted to do in my life – my “true north”. It is my constant, my inspiration that never changes. Having a guiding statement is nothing new. Companies, individuals, sports teams, armies, governments and endless others have used a guidance statement of some sort to point their way. They have many different titles and even different styles. You may hear them called mission statements, vision statements, character statements and an array of other names, but essentially, they are a north star – a guiding principle if you will. They are there to help keep us focused on the desired result.

Years ago I discovered for myself the power of what having a guiding principle – or inspiration statement will do to keep you focused on what you want to do, why you want to do it and how you will accomplish it. So if we must give it a name, why not just call it our “What, why, how statement”? It explains all three. If we want to make an impact in life, we need inspiration from within. Having a clearly delineated what-why-how statement provides that inspiration and helps plot your course.

I created my statement many years ago, and although I saw an immediate difference in my life, I didn’t fully realize the impact of such statements until several years later. As a minister, I have officiated over two-hundred weddings. One of my pre-requisites was that a couple must go through pre-marriage counseling. One of things I recommend to new couples is that they create a marriage statement – a guiding principle for their marriage. What they want it to be, why they want it to be that way and how they will accomplish it. I can’t begin to tell you how many of those couples have seen me years later and thanked me – not for officiating their wedding – but for recommending they create a marriage mission. That’s when I began to realize the power behind such a statement and how it serves as daily inspiration.

The first step in creating your own statement is to find – as Marilyn Lamoreaux puts it – what lights you up and brings you joy. What are you passionate about? Along about now, you might be thinking, “What could I ever do to change the world?” If so, think about this – before you put self-imposed limitations on yourself due to your “humble beginnings, think about Mother Teresa, Mahatma Ghandi, Martin Luther King, even Jesus Christ. Where your beginnings any more humble than any of theirs?

Take out a sheet of paper and write down two things that truly bother you and that you would eliminate from the world if you could wave a magic wand. Next, write the exact opposite of those words. Not an interpretation or a paraphrase, the exact opposite. For example, if you wrote, “I would end animal abuse”, your exact opposite statement might be, “I will provide loving homes for unwanted animals.” Or maybe you wrote, “There are too many elected officials with absolutely no integrity”, your exact opposite might be that you would dedicate your time working to get better candidates elected. Finally, craft those statements into one statement of what your burning desire might be, until you have a statement of what really matters, what really lights you up and brings you joy and that you will be relentlessly passionate about.

Next week, we will look at step 2. Creating and answering your “why”.